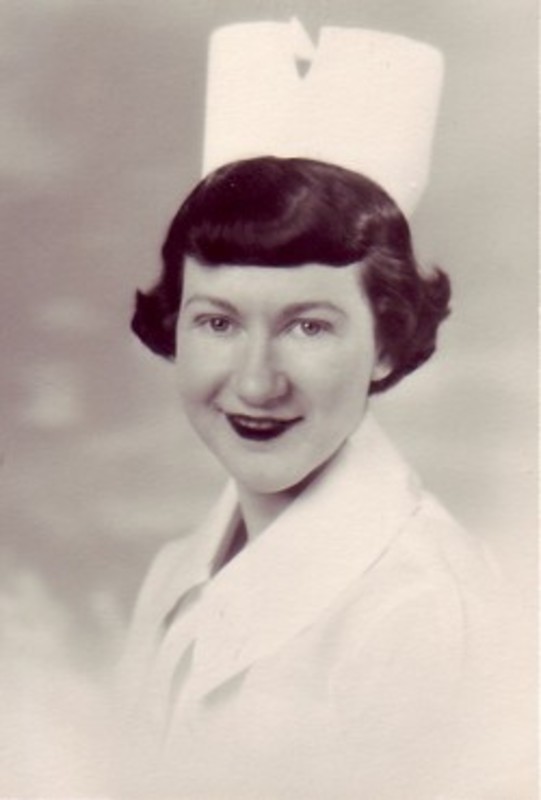 PETERSON, Delores Grace Larson, 78, of Claremore, Oklahoma died Saturday, October 30, 2010 in Tulsa, Oklahoma with her daughters by her side. Delores was born on December 1, 1931 in Taylor, Wisconsin, to Floyd and Cora Larson. She grew up in Taylor and attended Taylor High School where she was a cheerleader nicknamed “Del.” After graduating high school in 1950, Delores continued her education earning a Bachelor of Science degree in nursing from Kahler School of Nursing, Rochester, Minnesota. Later in life, she earned her Masters from Saint Joseph College, Maine. On June 15, 1953 Delores married Lione Peterson from Black Rivers Falls, Wisconsin. After a few years of marriage, Delores and Lione moved to Albuquerque, New Mexico where they raised their three daughters and lived there for several years. After retiring in 1994, Delores and Lione moved to Claremore, Oklahoma. Delores was proud to be a nurse and worked several years as a nurse. She was a lover of animals, especially her beloved dogs. Delores is survived by her husband of 57 years, Lione, three daughters, Shelley Curry and husband Terry of Albuquerque, New Mexico; Marsha Hohenstein of Claremore, Oklahoma; and Kathy Parsons and husband Steve of Tulsa, Oklahoma. Also surviving are seven grandchildren: Mindy Schnitz and husband Jay; Melinda Scott and husband Nick; Donny Curry; Nancy Ross and husband Sam; Lisa Huddleston and husband Jayson; Kristina Beck and husband Lance; and Julia Parsons. In addition, she is survived by nine great-grandchildren: Dillon, Michael, Laci, Brody, Amanda, Melissa, Kira, Wesley, and Tyler; two sisters, Beverly Hagen and Opal Jessop, and a brother, Junior. She was preceded in death by her parents; siblings Harlyn, Laverne, Spencer, and Naomi; and her son-in-law, Gary Hohenstein. Services are at Redeemer Lutheran Church, 220 N. Seminole, Claremore, OK, 10AM, Friday, November 5th. Services are under the direction of Butler-Stumpff Funeral Home, Tulsa, OK.