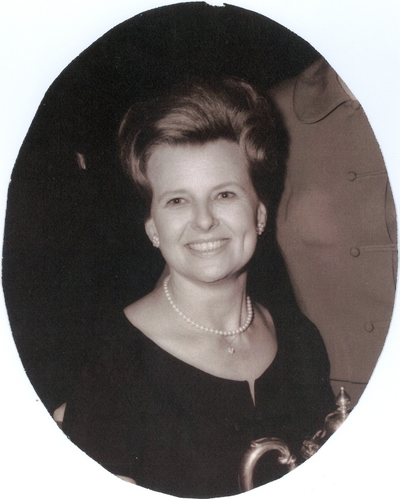 Dorothy was born in Perry, Oklahoma to Henry Carl “Hank” and Agatha Wilde. She was their third daughter and was the apple of her father’s eye. She attended Perry High School, was elected Band Queen and later St. Johns College in Winfield, KS.

Shortly after the end of WWII, she was working at the Perry Courthouse and became friends with the Courthouse custodian, Jake Swearingen. After learning that Dorothy wasn’t dating anyone, Jake decided to play matchmaker. Jake told his grandson to call Dorothy when he returned to Perry after serving as Lieutenant in the Army Air Corps. Wayne did call Dorothy and the rest is history. Wayne and Dorothy married in June, 1946 and started their lifelong partnership and love affair that only ended when Wayne preceded her in death in November, 2006. Theirs was a very successful marriage of 62 years.

Wayne and Dorothy loved to travel, some of their favorite places included Sedona, AZ and Naples, FL. They loved tennis and then golf became their passion. They especially enjoyed their quiet time spent at Grand Lake.

Her Lutheran faith was a lifelong source of strength and comfort. She served on the Altar Guild at

Grace Lutheran Church in Tulsa for many years. She also volunteered as a Meals on Wheels driver.

Dorothy was a wonderful friend, sister, mother, grandmother and wife. She had a beautiful heart and a welcoming smile. She retained that same sparkling smile all throughout her struggle with Alzheimer’s.

She was preceded in death by her parents, her two sisters Claire Barnett and Trudy LaFleur, two brothers, Hank Wilde and Jerry Wilde, daughter in law, Sheila Swearingen and beloved husband, Wayne. She is survived by her children, Scott Swearingen, Lynn (Robert) Bockmeulen, and Brett

Our family would like to thank the wonderful staff at Brookdale, Broken Arrow, who so lovingly took care of our Mother. She was one of a kind, and you treated her that way. In lieu of flowers, contributions may be made to: Grace Lutheran Church in memory of Dorothy L. Swearingen or the Alzheimer’s Foundation of America.