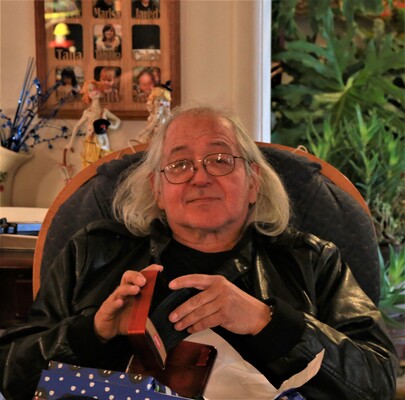 Michael was a retired United States Postal Service Clerk and Air Force veteran. He had a great sense of humor and unique way of looking at life. He enjoyed reading, movies, family gatherings, spending time(a lot of time) at the Buckaneer, science fiction & fantasy genres, and all things dinosaurs.

He was usually in the background with a book or camera, observing others and making funny comments. Michael was known  by many people from his long term patronage of the Buckaneer. He has seen many friends come and go over the years and regulars at the Buck know which is “his seat”.

Michael would continuously search for the most perfect and unique gifts for his grandchildren. Seeing the smiles and looks of wonderment on their faces upon receiving these gifts brought him happiness.

He was preceded in death by mother Mary Martin and Grandparents Bunnie and Ruth Manley.

In lieu of flowers, gifts may be made to the John 3:16 Mission.

The song had ended but the melody lingers…

He was loved and will be missed.