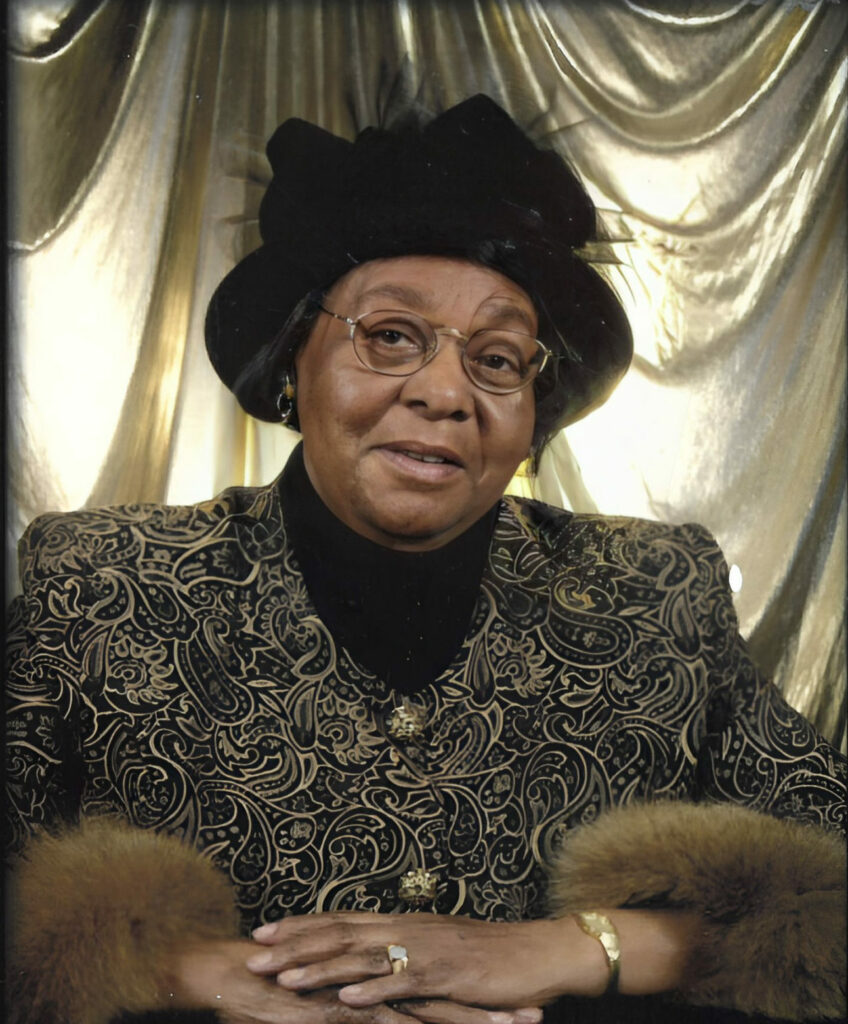 Thelmarie Evangeline Horne, twin to Velmarie, was born on April 11, 1928 in Sapulpa, OK to Leola Thomas and Jesse Horne. Her twin died shortly after birth. Thelmarie was seven when her mother passed away leaving her and three siblings to be raised by their maternal aunt and uncle, Lillie and Forrest Sylvan in Mounds, OK.
She received her formal education at Prairie View School District, Mounds, OK and Wheatley High School in Beggs, OK. She professed Christ as a child and was baptized by Rev. Brown at New Bethel Baptist Church, Mounds, OK.
At the age of eight her eyes alighted on a neighboring lad named Wilson Melvin Pike and she told him “I’m going to marry you when I grow up” and she did! They were married fifty three years before God called ‘Pike’ home. To this union: Ethel, Brenda, Wilson, B.J, Eugenia, Rudie and Samuel were born.
“Mama Pike” as she was affectionately called, worked hard to raise her children and others. You could always get a good meal and good advice from her house. She was renowned for her baking and soul food meals.
Wilson M. Pike was called to preach in 1965 after singing Gospel quartet for many years; he and Thelmarie were two of the original members of The Friendly Oklahoma Jubilees Singing Group. In 1966 he became the proud pastor of Galilee Missionary Baptist Church.
First Lady Thelmarie Pike left Pilgrim Rest Baptist Church and joined her husband at Galilee. She wore many hats there: Sunday School teacher, Superintendent, Mission President and mentor to young ministers’ wives. She was a faithful member until failing health slowed her down, however she loved her church and continued to support the church in all ways that she could.
God called his Angel to eternal rest on December 26, 2022 after being lovingly cared for at her home by her son Samuel and grandchildren
“Vangie”, “Mitch”, Steve, Jacci and “KayKay” for the past three years.
She was preceded in death by her husband, Rev. Wilson M. Pike, her grandparents, parents, two brothers, three sisters, two daughters: Brenda and Rudie and great grandson Johnny Dean.
Left to celebrate her homegoing: Sister-Annie Lee Sweet of Wichita, KS, daughter Ethel Pike Cannon, Fort Worth, TX, son Rev. Wilson E. Pike (LaSonya) Wichita, KS, daughters, Rev. B.J. Pike, Eugenia Pete, and, son Samuel H. Pike (Tonya) all of Tulsa, OK, plus three bonus daughters: Sharon Brown (Don), McAlester, OK, Algerita Gildon
(Roosevelt), and Barbara Gail Thompson, Tulsa, OK. Also twenty-six grandchildren, sixty great grandchildren, twenty-three great- great grandchildren and hosts of nieces, nephews, cousins and friends.