Arrangement Conference—A meeting in which the funeral director gathers with the family of the deceased to make funeral arrangements.

Arrangement Room—A room in the funeral home used to make the necessary funeral arrangements with the family of the deceased.

At need—Funeral and cemetery arrangements made at the time of death.

Burial—Placing of remains in an underground chamber, usually in a cemetery; also called ground burial interment.

Burial Vault—A lined and sealed unit that is specifically engineered to support the weight of the earth grave as well as the heavy equipment that passes over it.

Casket—A container made of wood, metal, or plastic into which the body is placed for interment. Caskets are sometimes referred to as “coffins.”

Cemetery—A business with property set aside for the disposition of the deceased.

Certified Death Certificate—A certified copy of the original certificate issued by the local government. Certified death certificates are used when making claims for insurance and other death benefits.

Chapel—A large room in the funeral home in which the funeral or memorial service is held.

Columbarium—A structure, similar to a mausoleum, but designed for inurnment of cremated remains.

Committal Service—The final portion of the funeral service at which time the deceased is interred or entombed and the last remarks or prayers are said; also referred to as graveside service.

Cosmetology—Use of cosmetics to restore appearance to the deceased.

Cremation—The reduction of human remains to small bone fragments through the use of intense heat and pulverization.

Cremation Garden—A dedicated section of a cemetery designed for the burial, scattering, or other permanent placement of ashes.

Crematory—A building which houses a retort.

Death Certificate—A legal document signed by the attending physician showing the cause of death and other vital statistical data pertaining to the deceased.

Disinter—To remove the remains from their place of interment.

Display Room—The room in the funeral home in which funeral merchandise such as caskets, urns, burial garments, and vaults are displayed.

Embalm—The process of preserving a body by means of circulating or placing preservative and antiseptic through the veins, arteries, and body cavities.

Eulogy—A brief speech that offers praise and celebrates the life of the person who has passed.

Family Car—The vehicle, often a limousine, in the funeral procession set aside for use by the immediate family.

Family Room—A specially arranged room in the funeral home which affords the family privacy at the time of the funeral service.

Flower Car—A vehicle used for the transportation of flower pieces from the funeral home to the church and/or cemetery.

Final Disposition—The final arrangement, generally referring to the decision between burial or cremation.

Full Couch—A casket which opens completely from one end to the other.

Funeral Director—A professional who helps families to plan funeral services for their loved ones while honoring the deceased and celebrating a life lived. Also known as morticians or undertakers.

Funeral Home—A business that offers funeral services for the deceased and their families. Also called a mortuary.

Funeral Service—A ceremony marking an individual’s death. The funeral service can be a religious or cultural event and helps to honor the deceased.

Funeral Spray—A collective mass of cut flowers sent to the residence of the deceased or to the funeral home as a floral tribute to the deceased.

Grave—An excavation in the earth for the purpose of burying the deceased.

Grave or Memorial Marker—Commonly referred to as headstones, these are memorials that are usually made of metal or stone which include such information as the name of the individual, date of birth and death, symbols, and words of tribute; also called monuments when they stand upright.

Half Couch—A casket in which only half of the top opens to display the head to the waist of the deceased.

Hearse—A motor coach designed and usually used for the transporting of the casketed remains from the place the funeral service is conducted to the cemetery. A hearse is also known as a coach.

Inter—To bury human remains in the earth in a grave or tomb.

Inurnment—The placement of cremated human remains in an urn and a placement of such urn in a niche, crypt, grave, or other suitable location in a cemetery.

Lead Car—The vehicle in which the funeral director and sometimes the clergyman rides. When the procession is formed, the lead car moves to the head and leads the procession to the church and/or cemetery.

Mausoleum—A public or private building especially designed for entombment. It is usually a permanent, above-ground resting place for the deceased.

Memorial Benches—Benches that either simply memorialize a loved one scattered or buried in a cremation garden, or actually contain the remains within.

Memorial Donation—A memorial contribution specified to a particular cause or charity, usually in lieu of flowers.

Memorial Service—A service conducted in memory of the deceased without the remains being present; also called a tribute service.

Minister’s Room—A room in the funeral home set aside for the clergyman wherein he or she can prepare for the funeral service.

Morgue—A place in which the bodies of persons found deceased are kept until identified and claimed or until arrangements for burial have been made.

Next-of-Kin—A person’s nearest relative; the person who holds the responsibility for making decisions for the funeral on behalf of the deceased.

Niche—A recess in a wall or columbarium used for the placement of urns containing cremated remains.

Obituary—The paragraph in the obituary section of a newspaper or on the internet announcing the death of a person and giving details of the funeral service the survivors wish to have published.

Outer Burial Container—A concrete, metal, or wood structure used to support a casket in the ground.

Pallbearers—Individuals whose duty is to carry the casket when necessary during funeral service. Pallbearers in some areas of the country are hired and in other areas are typically close friends and relatives of the deceased.

Plot—A measured piece of land in a cemetery in which interment rights are purchased by a family or individual. A plot usually contains two or more graves.

Prearranged Funeral—Funeral arrangements completed by an individual prior to his/her death, often funded by insurance or trust.

Preparation Room—A room in a funeral home designed and equipped for preparing the deceased for final disposition.

Preplan—Pre-planning is the process in which an individual creates their statement of wishes for their final event, allowing loved ones to focus on celebrating a life lived.

Private Family Estate—A small section of a cemetery, usually bordered by gates, shrubbery, or other dividers, that allow for ground burial of several members of the same family.

Private Service—This service is by invitation only and may be held at a place of worship, a funeral home, or a family home.

Procession—The vehicular movement of the funeral from the place where the funeral service was conducted to the cemetery. May also apply to a church funeral where the mourners follow the casket as it is brought into and taken out of the church.

Register—A book made available by the funeral director for recording the names of people visiting the funeral home to pay their respects to the deceased. Also has space for entering other data such as name, dates of birth and death of the deceased, name of the officiating clergyman, place of interment, time and date of service, list of floral tributes, etc.

Scattering Garden—A dedicated section of a cemetery wherein families can scatter the ashes of their loved ones. Often plaques are available to memorialize the loved ones whose remains have been scattered there.

Service Car—Usually a utility vehicle to which tasteful ornamentation may be added in the form of a metal firm name plate, post lamps, etc. It is utilized to transport chairs, church trucks, flower stands, shipping cases, etc.

Urn—A container into which cremated remains are placed, made of metal, wood, or stone.

Visitation—An opportunity for survivors and friends to view the deceased in private, usually in a special room within the funeral home; also referred to as viewing.

Visitation Room—A room of the funeral home where family and friends gather. 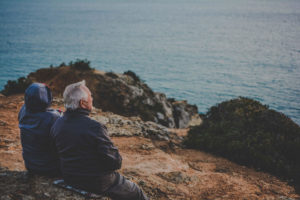 You can count on us to help you pre-plan, taking out all the guesswork, bringing greater peace of mind to you and your loved ones.

We’d love to help you make one of life’s most difficult days a bit easier.