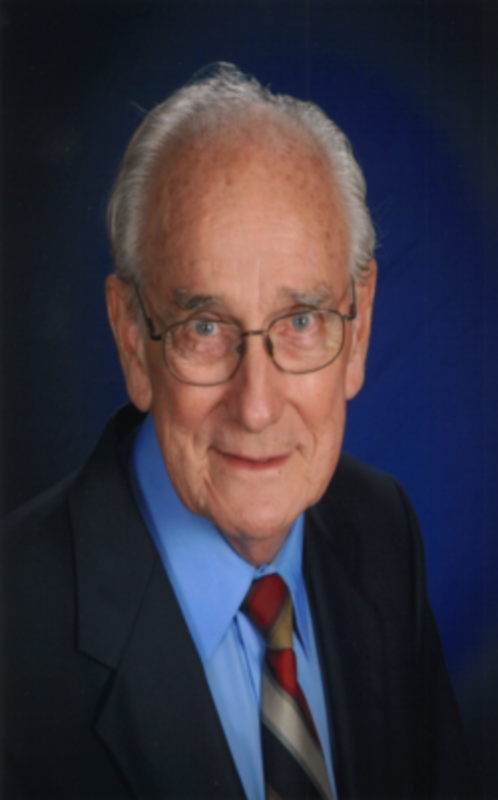 Dr. Guy William Logsdon, 83, “shuffled off this mortal coil” the evening of February 5, 2018, after a brief illness. Born May 31, 1934 in Ada, OK, he was the fifth and youngest child of Guy and Mattie Marsalas Logsdon. The family was musical and by thirteen he was playing bass in the Logsdon Family Band at dances around Ada. A proficient storyteller, Guy enjoyed sharing the numerous raucous events he witnessed as a teen musician, unbeknownst to his parents. Along with playing music, he also helped out at his father’s Logsdon Furniture Store and assisted at the family-owned The Western Store, just the second western clothing store in the state of Oklahoma.

While a sophomore at East Central University in Ada, he began dating freshman Phyllis Landers from Okemah, OK, whom he had previously met at Methodist church camp. They were married two months later and recently celebrated their 64th wedding anniversary.

Because he was known for his love of music and Phyllis was from Okemah, he began hearing about Okemah’s native son, Woody Guthrie. He quickly discovered that Woody was not a popular subject in the small community because of his unusual lifestyle and the mistaken belief that Woody was a Communist. This only encouraged Guy to continue his research.

In 1960 the family moved to the remote mountain town of Payson, AZ where he taught high school English. While the family created lifelong friendships and is still credited by many of his students for fostering their love of reading, it was here Guy was reported to the government for being a suspected Communist because it was known he was a Woody Guthrie enthusiast and he had a subscription to Sing Out Magazine, a New York City publication of folk music and writings. He was, of course, exonerated.

A move back to Norman, OK allowed Guy to complete his Masters Degree in Library Science and eventually his Doctorate of Education from the University of Oklahoma. In 1967, Guy became Director of Libraries at the University of Tulsa, at the time the youngest director in the nation of a major university library. By then Guy and Phyllis were a popular duo, singing and speaking at events around the state. He was an accomplished guitar player with a beautiful voice, a dry sense of humor and an unrelenting expectation, especially from his four daughters, that spoken English was always grammatically correct.

In 1970, Guy wrote and narrated sixteen TV shows “Folklore of the Southwest” for Oklahoma’s public television, OETA. In 1972, he started the 1st Tulsa State Fair Fiddlers Contest, a popular event that continues today. In 1974, he produced the nation’s first Western Swing Festival, recorded by National Public Radio. And Woody Guthrie’s wife Marjorie insisted that Guy be a consultant on the script and during filming of the 1976 movie “Bound for Glory.”

Oklahoma was featured at the 1982 Smithsonian Folklife Festival on the mall in Washington, DC, and included a Woody Guthrie Tribute. Because of Guy’s extensive knowledge of Oklahoma history and music, he was coordinator and emcee of the Oklahoma stage. Guy was also one of the original founders of Okemah’s Woody Guthrie Folk Festival, also known as WoodyFest, now in its third decade.

Guy’s writing credits are immense. He wrote the extensive liner notes for both Woody Guthrie and Pete Seeger compilation CDs produced by Smithsonian Folkways. His books include “The University of Tulsa: A History, 1882-1972”, “The Whorehouse Bells Were Ringing and Other Songs Cowboys Sing”, “Ada, Oklahoma, Queen City of the Chickasaw Nation: A Pictorial History”, “Saddle Serenaders” and “The Flip of the Coin; the Story of Tommy Allsup”. His most recent publication was “Woody’s Road; Woody Guthrie’s Letters Home, Drawings, Photos, and Other Unburied Treasures” co-authored with Mary Jo Guthrie Edgmon, Woody’s youngest sister.

In addition to being known worldwide as a Woody Guthrie scholar, his writing and research about Western Swing led him to lifelong friendships with Bob and Johnnie Lee Wills and many of the Texas Playboys.

At the time of his death, Guy was serving on the boards of the Oklahoma Historical Society and the National Fiddlers Hall of Fame. He was an early supporter of Tulsa’s OKPOP Museum and was regularly consulted about Oklahoma history, music, Woody Guthrie and Bob Wills. The Guy Logsdon household was always a place filled with music, books, and fun.

He was preceded in death by his parents, sister Bettie Bell, brother John Logsdon, and his youngest daughter Nathalie Marsalas Lester. He is survived by his wife Phyllis and daughters Tamara Hawkinson (Jim), Cindy Black (Baxter) and Susan Patterson (Bill) along with sisters Jean Long Meek and Bobbie Koch. Known as Dr. Guy, he was adored by his grandchildren Audra, Jennifer (Will), Heather (Nick), Grace (Matt), Samantha, William, Samuel, Dylan, and Guy (Jessica) and great-grandchildren Phoenix, Storm, William, Sophia, Savannah, and Mattie (named for his mother.)

A memorial service will be held on Monday, February 12, 2 p.m. at Boston Avenue United Methodist Church in Tulsa. Reception and music to follow.